1 flag for beating the game, 2 flags if S.S.Anne doesn’t deport from the dock.

The challenge offered two emulators for two operating systems (linux and macos) and a ROM.

From the file command, we can actually see that the ROM is weird since it doesn’t detect it as a real GB ROM.

For example, a real GBA ROM would output something like this:

From this, we can assume the ROM must be encrypted and the emulator must be decrypting it before loading it.

There is a high chance that the author of the challenge didn’t implement an emulator from scratch, so this is probably a modified emulator from an open source project.

From the file command file emulator_linux we can see the symbols weren’t stripped, so we can easily identify the functions by their real names.

If we search for load, we can see the namespace is FunkyBoy: 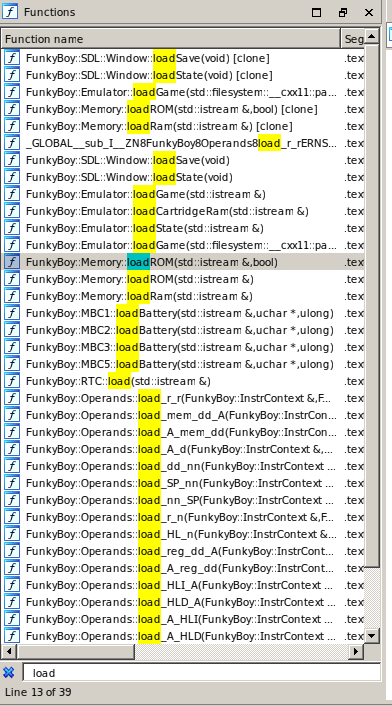 FunkyBoy is an open source project, and we can take a look at the source code in github.

We could play the ROM and beat the game, but unfortunately it seems to be pretty hard to do so since the game seems to have been modified to be harder to beat (Brock has 22 level Pokemon).

I used two methods to dump the ROM, GDB and Frida.

We can use the command dump memory but first we need to find a place to breakpoint and dump the ROM.

By looking at the original code of the emulator, we can see the rom is being loaded at the function Memory::loadROM.

As we can see here, the ROM raw_bytes are eventually saved in a class variable rom.

We could have imported the structures to make IDA/Ghidra code much more readable, but to be honest, it takes some time to fix and import, and the code is not very hard to understand and locate where the encryption is being done.

As we can see below, the code shows up right after file reading:

We can setup our breakpoint at 0x40d6cf, but before that, we would need to know the size of the ROM. Looking around on github, we can find a place where the ROM size is calculated.

We can locate this in IDA/Ghidra by looking for the call to romSizeInBytes:

Finally we use GDB to dump from memory:

We can also use a very cool project named frida.

This can be easily installed with the following commands:

This project makes it very easy to hook functions, and there is a very good function to hook and get the pointer of the ROM variable.

The most interesting thing about Frida is that we can easily use JavaScript to modify the behaviour when a certain function is called or even call other functions inside of it.

Here is an example how we could dump the file using frida:

To run frida we can use the following command:

Getting to the hall of fame

Now that we dumped the file, we can use other emulators to debug the ROM.

To exploit the game, my theory was to find the offset of the warp_location when the player enters a door or switches to a new map and change it to the Hall of Fame room.

The bgb emulator is excellent because it has a memory searcher similar to Cheat Engine and also a debugger:

I used the cheat memory searcher to find the offset required.

First I clicked on start (we get all the addresses listed in the window): 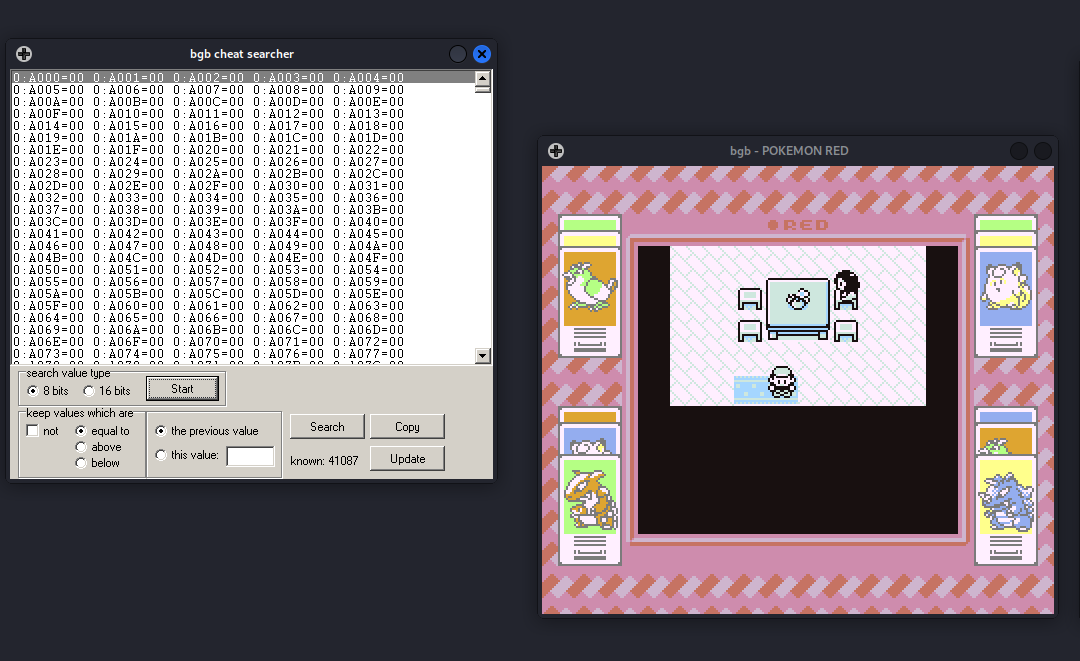 So if we exit the door, we will be teleported to another map. It’s logical to assume that the value stored in the offset where the connections between the maps will change. After we exit the map, we can select the check box not -> equal to-> search With this, we can see we eliminated 40k possibilities: 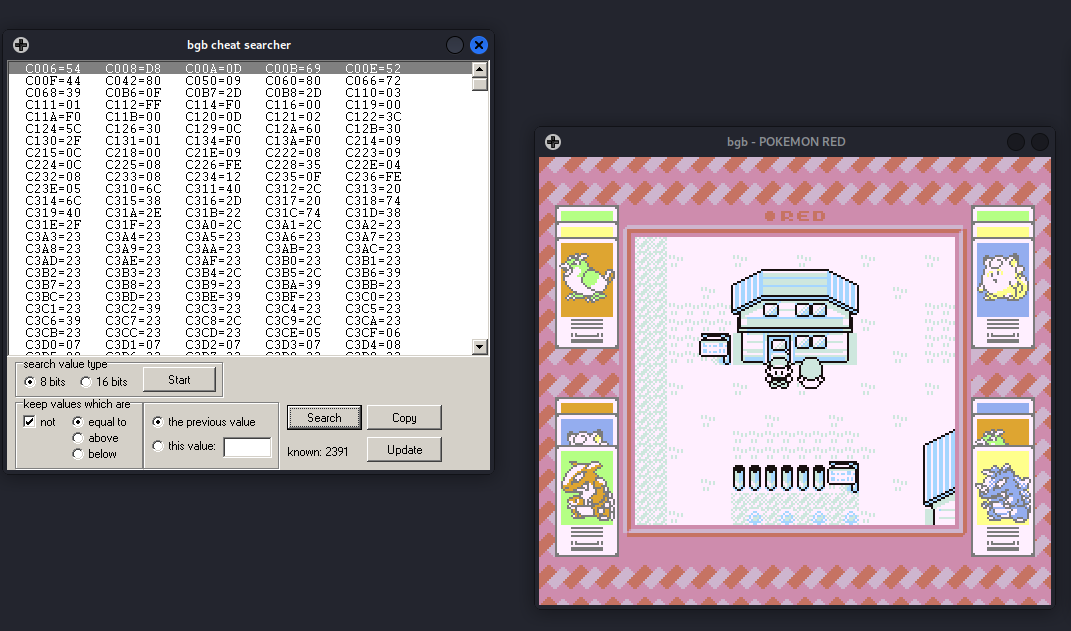 Then I decided to reenter the room and try the same method with not -> equal to -> the previous value -> search but the number of addresses reduced was very low. 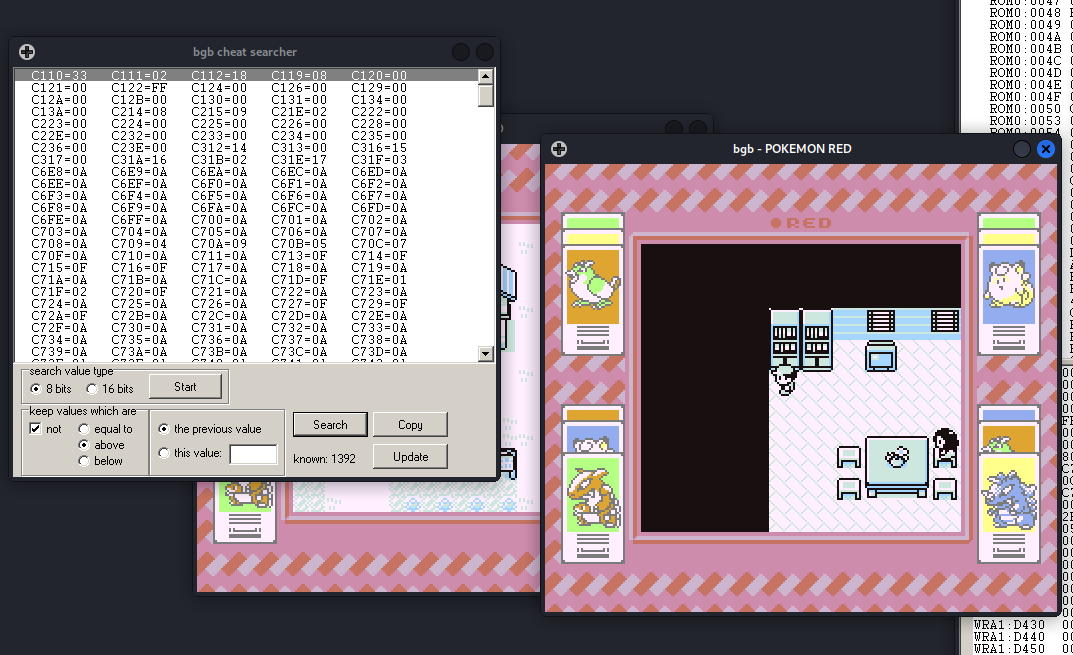 With this, I was able to reduce it to 100 addresses: 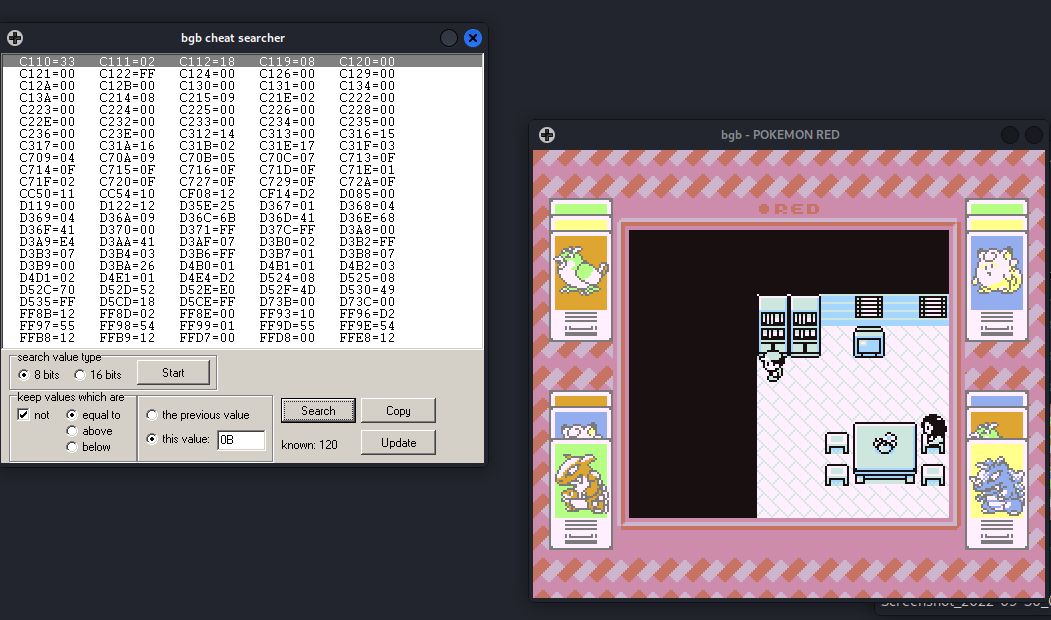 It becomes difficult to reduce it further from here… So I searched in bubblepedia on possible warp_location values, and I found the one that could lead me to the blue house: 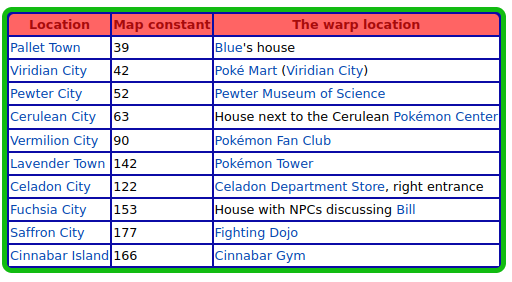 The constant for Blue’s house is 39. Converting to hexadecimal, we get 0x27.

Exiting the house and going near Blue’s house, we can use the filter equal to -> this value: 27 -> search:

We are left with two offsets, D3B6 and D73C by choosing to modify the first address to 2A (Poké Mart (Viridian City) ): 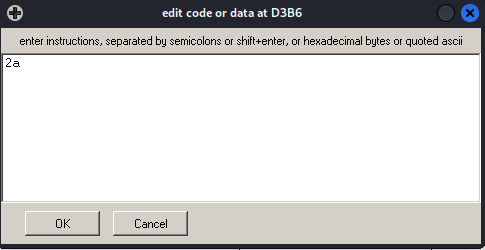 We are teleported to the Poké Mart after entering the door:

Now that we know how to teleport, we must first leave the pokemart and return to the blues’ house door.

Meanwhile I found the complete list of the warp locations here in the pokemon red source code.

By changing the constant to 118 -> 0x76, we finally get teleported to the final room of the game and win: