Description:
The key to success in the battlefield is always the secure allocation of resources!
nc 76.74.177.238 9001
libc.so.6
libsalloc.so
securalloc.elf

We have an extra shared library libsalloc.so to analyse but first lets check the security on securalloc.elf:

Full RELRO is enabled so GOT is read only this is something that we always should take in mind before proceeding any further.

Now lets check for a vulnerability :

Like other heap challenges we will have the classic functions print, create, delete and edit but this time we have an additional shared library named libsalloc.so and the functions used from it are:

Opening libsalloc.so in ida we can see it uses fopen to open /dev/urandom to create a canary: 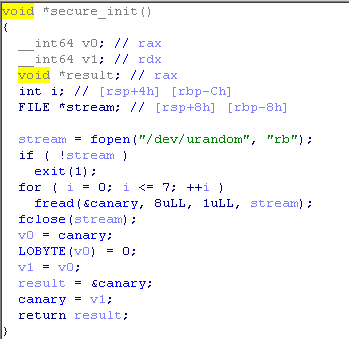 And why this is bad ? Looking at fopen internals:

So a malloc of struct locked_FILE is executed, this struct will store IO_FILE pointers and the /dev/urandom data.

Look in memory after running fopen: 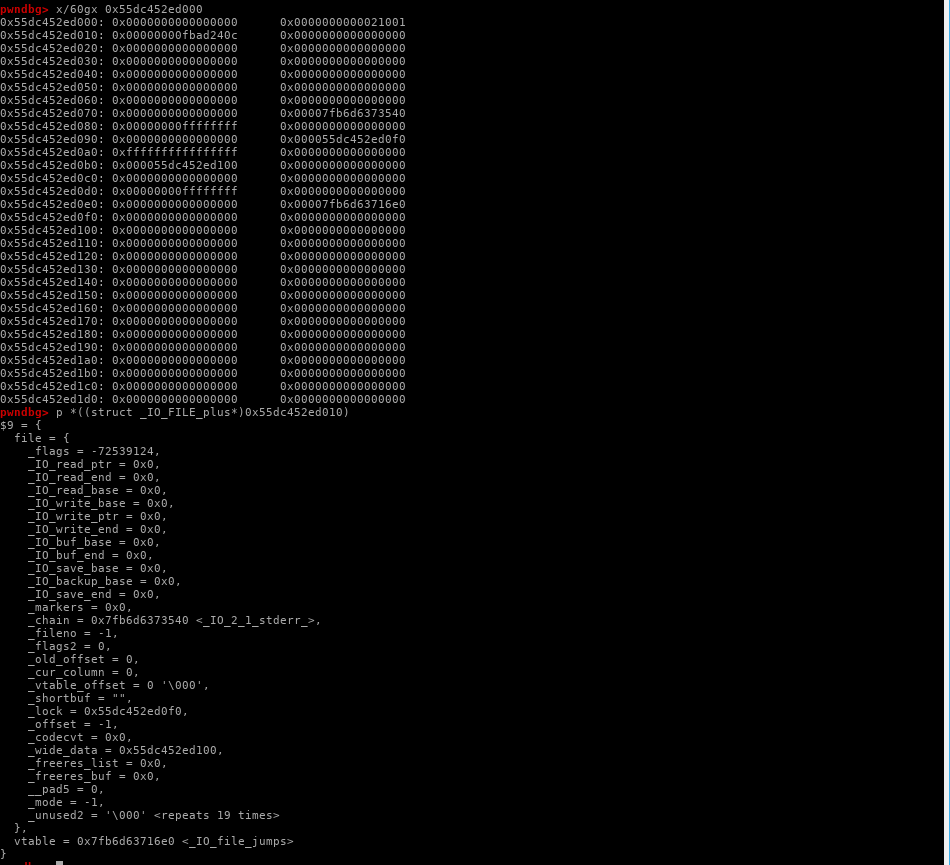 The look in memory:

This data is freed but not cleared which means later we can leak this data by overlapping new chunks and use the print function to leak libc, heap and even the heap canary created by this library.

securealloc adds 0x10 more bytes to the allocated space to store a canary at the end of the chunk and the size at the beginning:

There is an integer overflow at malloc(size + 0x10) this could also be used to bypass the canary unfortunately the canary is going to be stored at a very high heap address which is unmapped we would have to expand the heap multiple times to get a mappable address, while this is feasible to do it locally it isn’t remotely because while there is a limit restriction of memory on the server we also would take 1 or 2 hours to do it (because we are communicating remotely).

There is a double free verification and also wipes out the chunk data before freeing.

this the function that verifies if there is a heap overflow.

This the looks of the memory after secure_init:

To leak both we can first allocate a chunk of 0x60 and then 0x30 (this one leaks heap) and then 0x10 (this one will leak IO_JUMP libc address).

The python code to do this:

The canary is located at /dev/urandom data: 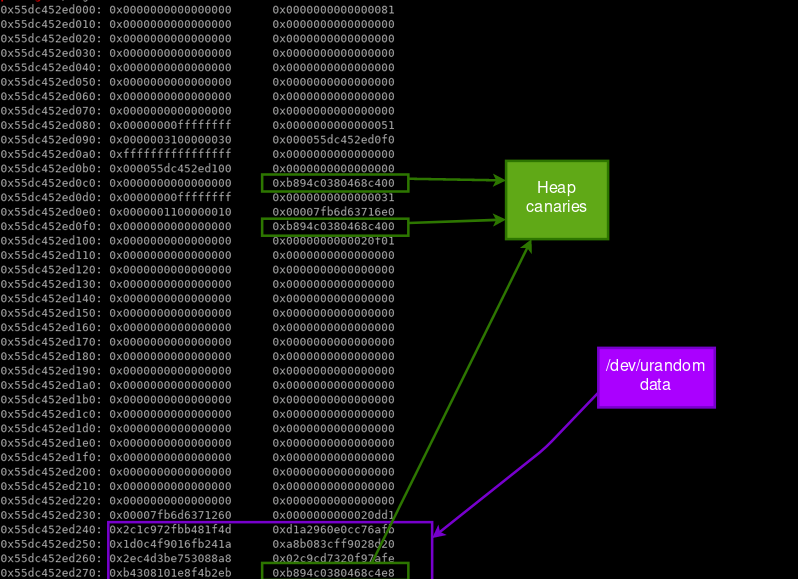 We do the same thing by allocating first a chunk of data 0x140 and then 0x8:

This isn’t exactly house of orange, house of orange usually is used when there isn’t a possibility of using a free by forcing the heap to expand by triggering sysmalloc when the top_chunk has no more space to allocate freeing the topchunk…

In our case we just want to convert the freed 0x60 sized chunk we freed previously into a smallbin.

When there is a large request(largebin size is enough) of malloc, a consolidation happens in order to prevent fragmentation. Every fastbin is moved to the unsortedbin, consolidates if possible, and finally goes to smallbin.

Later we use an unsortedbin attack with File Stream Oriented Programming to get a system(‘/bin/sh’) shell. 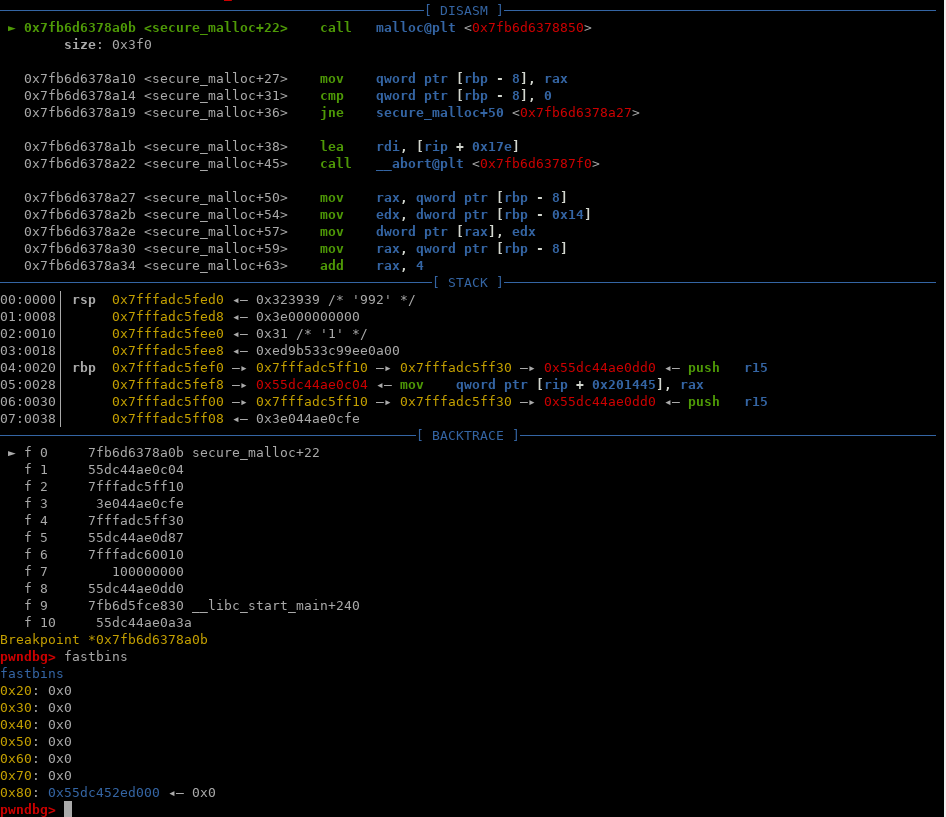 Now after executing malloc this fastbin chunk will be transformed into a smallbin: 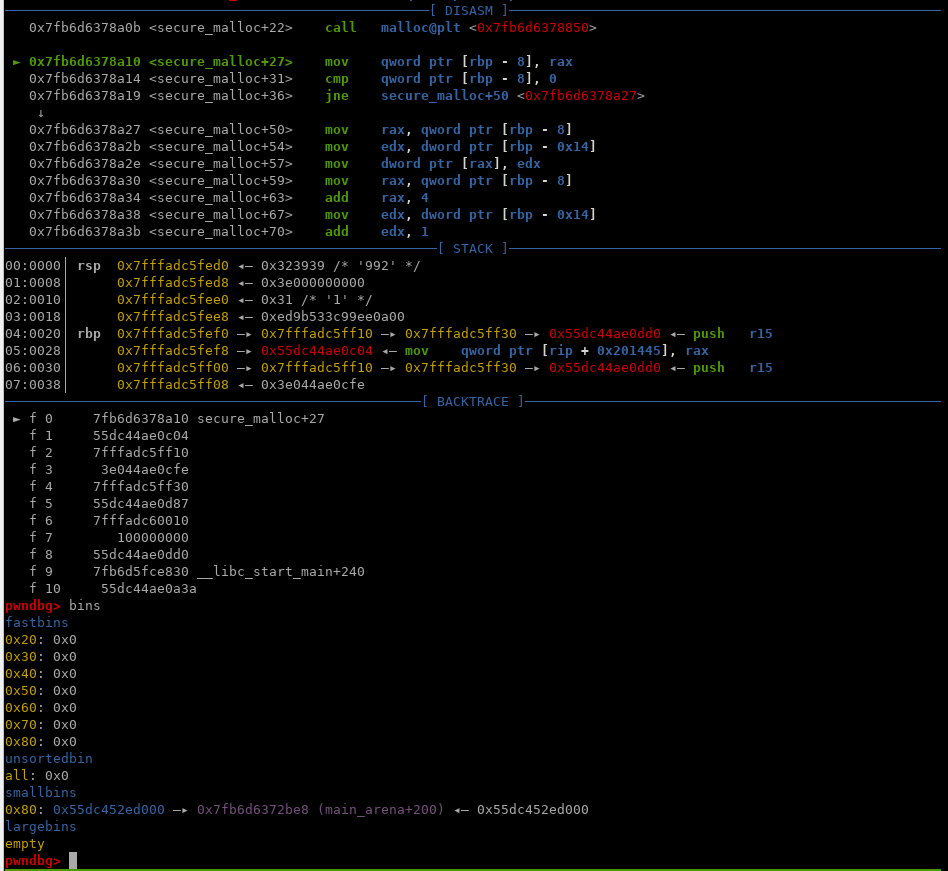 We know that ROP can be used to hijack the control flow of the program, this can also be achieved by using file stream oriented programming but this one is achieved through an attack at File Stream.

We need to first understand malloc error message, which malloc_printerr is the function used to print the error:

We can use the heap overflow to change the smallbin bk and implement the unsortbin attack, bk address should point to _IO_list_all -0x10 so we can corrupt _IO_list_all.

Here is how _IO_list_all looks in memory:

We need to forge an IO file that meets some specifications:

Also need to change vtable address to a place we can control in this case I used a place on the heap.

We need then the _IO_OVERFLOW pointer to be setted to system, the fp header is set to /bin/sh.

we first allocate a chunk of size 0x0 but with the summation of securealloc the size will be 0x0+0x10 =0x10, this will create a small chunk and it’s going to be allocated in the space of the first chunk we freed taking up 0x10 of it’s space, and create a new unsortedbin as we can see below: 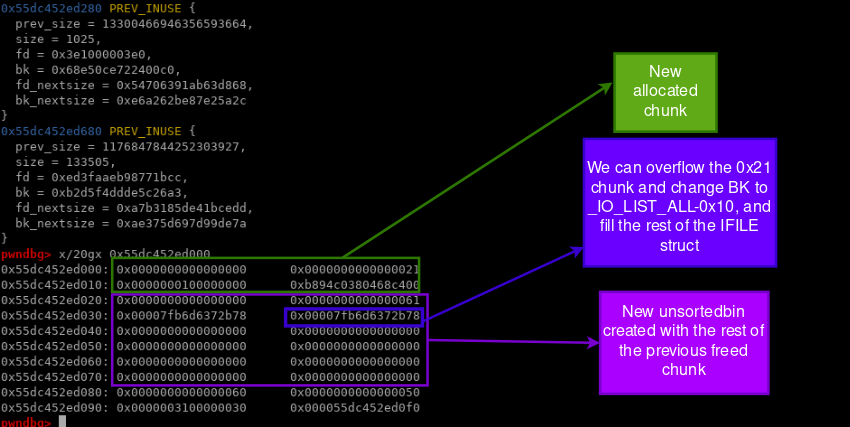 This is the payload we want to use:

The data after the overflow:

The exploit is not very reliable and sometimes fails so I putted it in an infinite loop to avoid rerunning the script at failurers: